How should I act in the Courtroom?

There are a few things that are important to remember when you go to court: 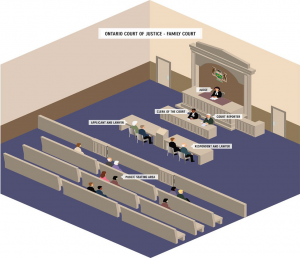 In the courtroom, the judge sits on a dais (a platform) at the front of the room. There will also be a court clerk and a court reporter in the courtroom. Please be aware that a family law case is open to the public and that everything said or done in the courtroom is recorded. You may also see people walking in and out of the courtroom.

There are two tables in front of the judge called counsel tables. They are for the applicant and the respondent in the case. The applicant and respondent are parties in the case. You are either the applicant or the respondent. Usually, the parties sit there with their lawyers. If you don’t have a lawyer and you want to bring someone to sit with you at these tables, make sure that you ask the judge for permission to do this. However, if that person is going to be a witness, the judge won’t allow that person to sit with you. You should try to choose someone who is not going to be a witness.

What do I wear?